A few years ago, I began feeling life unpalatable here in California. It could be the High Desert. It could be the political and social alienation. It could also be that trips to the Midwest caused me to fall in love with green grass and trees; and so began my coveted-ness for "somewhere else."

I blabbed frequently about leaving until my husband told me to stop; he even told me he liked California. It was difficult to accept, but I had to train myself to stop thinking about leaving because it wasn't going to happen.

Until last October. My husband was let go as GM, after being with his company for 17 years. It was then that he mentioned leaving California.

He submitted applications to companies in Texas but didn't get a bite. He suggested picking up and going to Texas, and looking for a job when we arrived. We could live off savings for awhile. But after a month of job hunting, he found a job here, and he returned to work.

Since then, his mind has changed completely, and we are both determined to leave. The main reason we wait is for my husband to finish school. Next summer, 2020. After that, we are free, God willing.

HOW I ENDED UP IN CALI

In 1982, my parents moved our family to California -- from Brooklyn, New York (because of crime and overall environment) to a little town called Apple Valley, part of the High Desert area of San Bernardino County.

I can still remember the stars in the sky the night we arrived. I had never seen so many stars! That was because there were no street lights, buildings, or houses. Nothing but desert.

Over the decades, the High Desert has changed for the worst. It is no longer a good place to raise a family. Too many people, cars, accidents, and houses on top of houses; too much crime and homelessness. The HD was never designed to accommodate this many people.

My husband and I agree that we no longer want to raise our children in this environment, nor do we want them to be stuck in this state.

MY STORY WITH VACCINES

I personally never thought badly about vaccinations. In fact, I dutifully followed the CDC schedule up to five years old with my first son. But I started to investigate vaccines after my first daughter was born.

At 4 months, I had brought her to a new pediatrician and was asked to sign a waiver stating that I understood vaccines may cause injury and sometimes death.

I hated having to decide on the spot if I should initial my baby's possible and unnecessary injury or death for diseases that were practically eradicated. I didn't want to believe this, and the nurse confirmed the danger was possible, though very rare. Then she told me that one day all the vaccines would be in one injection and babies wouldn't have multiple injections, as if that would eliminate injury and death.

I gulped and signed the waivers. I was afraid not to.

Immediately, I began researching vaccines and found information that made me extremely uncomfortable. I started questioning other parents and found many who did not vaccinate their children at all.

I still wasn't totally against vaccines, and I never saw anything to suspect my children were hurt, but I started requesting that my children only receive one vaccine per visit. And I chose the vaccine each visit.

Sometimes I was told that I had a "mommy problem." Another time a doctor asked me what I would do if my daughter, while driving in Mexico, got into a car accident and needed a transfusion and ended up with Hepatitis. I didn't know how to answer that. I was still trying to understand what she was doing in Mexico. But I never strayed from my conscience and agreed to only one vaccine per visit.

By the time I had my third child, I felt confident about my decision because I had seen a difference with my children after receiving one injection as opposed to receiving multiple vaccines at once.

But this next incident was horrifying. My third child saw a different pediatrician for her 4-month check up. I expected the doctor would talk to me first about her immunizations for that visit, and then I would explain that I only wanted the one for Pertussis.

However, the nurse practitioner entered the room with a box of six vials, already filled. Immediately I asked to see the doctor. She questioned me, and I explained why. Confused, she went to speak to him and returned to tell me that I would have to pay for the ones I discarded. I asked how much, and she said some were $100!

I considered my husband would not be happy with me paying $500 for vaccines I discarded. It was a frustrating position, but I agreed to the vaccines -- all six vials, which equalled nine total immunizations.

The rest of the day and into the night my baby cried and screamed; she wouldn't sleep, eat, be consoled, and had diarrhea. She cried in my husband's arms until well after midnight.

To add insult to injury, the pediatrician told us he would no longer see us if I did not follow the CDC schedule. (By the way, that doctor was a Republican; but he wouldn't see us anymore, which was fine with me. I found another doctor who would.)

The point is, I believed it was totally unnecessary to make a child this miserable and sick...and for what? What was the urgency to go to this extent?

Ironically, I remembered reading material from the hospital that when I introduced solid foods to my infant, to do it one at a time and wait a few days to observe for allergic reactions. That's with food! Why not with mercury, gelatin, formaldehyde, and aluminum?

Needless to say, all five of my kids are "behind" in their immunizations, according to the suggested CDC schedule, which is ever changing. Who can keep up? 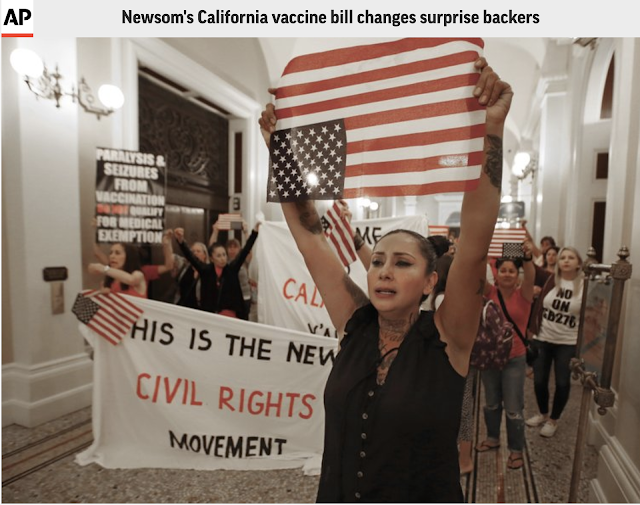 The reality today is that so many young families have already fled and are planning to flee California because they have been pushed to their limits. Many of these families have children who were injured or have died because of vaccines, and they don't want to vaccinate anymore of their children.

This is REAL! People don't pick up and move out of state, leaving family, friends, and familiarity,  because they don't like vaccinating their kids. They are leaving because they fear for the safety of their children, and they no longer believe they can protect them here.

When you take away the very last ounce of liberty and freedom parents have to protect their children, then survival kicks in and they will fight to the end and/or flee. There is almost nothing left to fight for in California; hence, people are fleeing.

Believe me...there are other reasons to flee this state, being unreasonably expensive (housing, utilities, food, gas, education, and other basic needs) and greedily regulated (for business and basic citizen requirements, like to own and maintain a vehicle).

California harbors criminal illegals without knowing who they are, if they have been vaccinated, or if they are already infected and contagious.

Voters supported the release of violent felons by reducing sentences, and our current governor, in turn, stayed the executions of rapists and child molesters and murders indefinitely. He also recently commuted sentences for lifers convicted of murder or attempted murder.

California is becoming a very dangerous place to raise your family. And I am not going to explain the shameless sex education boot camp currently offered in public schools. Look for yourself.

It's heart breaking to live here.

People are finally waking up.

Unfortunately, I think it is too late for California.

P.S. Maybe we should take a lesson from Hong Kong, where they fight to preserve freedom at the immediate onset of threat to individual and personal liberty.

I don't blame you!

People are so blind. I think in James and Proverbs it talks about people rushing toward destruction. California champions the things that are going to destroy it.

Good luck with finding a place to live. Too bad you couldn't get a job here in Texas. We love it here and we need the conservatives of California to come. California is sending the liberals who seem to want to turn Texas into another California. I mean, why did they leave in the first place?

They sure are...running toward destruction.

I have no idea what will happen in Texas, but I think it may be several things: the influx of immigrants from Central and South America, who should be voting for liberty and freedom bc they should know better, but they tend to vote for liberals who pander terribly to them; and possibly the influx of young people and families moving to Texas bc they cannot afford California; and also young generations in general who tend to vote Democrat and are new to voting, who also tend to vote liberal bc they haven't learned, yet.

And I also say, I think one problem in America is that we do not value personal liberty, freedom, and responsibility anymore. When you look to government as your savior and the distributor of all things equal and fair, and that is your god (equality), then you will sacrifice your liberty and responsibility, making it the government's obligation -- who will gladly take that bc government is full of those seeking more power. It's a vicious cycle.