Book Review (sort of): The Old Man and the Sea by Ernest Hemingway 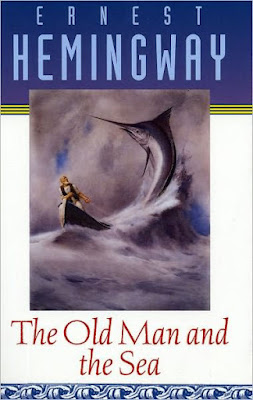 The Old Man and the Sea
Ernest Hemingway

Keeping to the sea theme, I read this classic to my children (ages 8, 9, and 12).  When I was 10 and in fifth grade, this was required reading for me, though I know I did not appreciate it as I do now. Nonetheless, it had become one of my favorite stories as a kid.

I have read it three more times since, including this time, and there is still much to pull out of it; but at this time I am not worried about my younger ones grasping all of the themes and ideas.  The most important thing is that they have been exposed to The Old Man and the Sea and Ernest Hemingway.

Instead, I allowed them to support their own claims to the moral of the story, which they believed was "being prepared."  After all, Santiago lamented numerous times that he was not prepared.  The fact that my kids picked up on something repeated is important.

All three of them agreed that it was too sad of a story.   When I was 10, reading it on my own, I remember the absolute agony of Santiago's experience.  It was excruciating for me.  I never forgot it, and I know my kids will not either.  It is called effective writing.

Maybe they will read it again someday, and they will have a different experience.  They will see it differently, like I do: that man is designed with a spirt of perseverance, that he has the will to try, and that ultimately he is never truly defeated.

Email ThisBlogThis!Share to TwitterShare to FacebookShare to Pinterest
Labels: Ernest Hemingway, Sail the Seven Seas, The Old Man and the Sea

I'm impressed you read this book when you were ten. When I was ten I was reading comic books (mostly). I haven't read this book in years, although I've just finished my third Hemingway bio. A lot of this bio takes place in Cuba because the man who wrote it was living there too.
Hemingway seemed to be obsessed with man overcoming powerful animals. In the end the Old Man was defeated by a gang of even more powerful animals (sharks), although probably he could have defeated them if he hadn't gone fishing in a little row boat.

Being prepared and foreseeing possible consequences would have helped.

Do you teach your children how to play chess? I found that was a great game for training children in preparation as well as foreseeing future outcomes.

Thanks. TOMATS was required reading in my Catholic school. I realize today that they were following the classical Christian model of education back in the 70s. We had to read The Scarlet Letter and Of Mice and Men, too -- and I don't think it was an abridged version of Steinbeck either. Crazy!

There is a sense of man v. beast in this one. He talks about the lions a lot, too.

Great point about the boat. I wondered that, as well.

About chess -- I do not know how to play, but my kids taught themselves, and they are obsessed with it. We only owned three sets, and it was like pulling teeth to make them choose which one to keep when we were going though their excessive possessions.