The Underground History of American Education by John Taylor Gatto 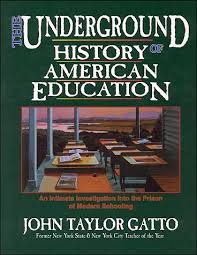 Everyone should read this book!  Whether you homeschool, are thinking of homeschooling, have kids in public school, are a teacher or work within the education system, and anybody who went to school, which is almost everybody.  This is an inside look at one teacher's long experience within the American public education system. The teacher, John Taylor Gatto, candidly retells his story, some of which will seem unbelievable, and others that will make you remember your own experience in public school. You may have to agree.

Gatto worked as a public school teacher for about thirty years in the New York City area, and was named Teacher of the Year for three consecutive years.


Here is my summary of the Prologue: America was a nation that prided itself on independence, individualism, self-reliance, self-sufficiency, and resourcefulness.  Americans, no matter how poor, understood they could become their own master; they would have to in order to feed themselves and their families.


Some time after the Civil War and the start of the Industrial Revolution, some of those wealthy, elite, powerful men who had become their own masters, understood the need for mass production and workers willing to give up their own freedoms for the good of all, and hence, forced mass schooling was born.  One hundred years later, Americans do not think of their individualism like our fore fathers had.  We think about going to school in order to get a job and work for someone else.  Our independent spirit has been snuffed out.

Here are some of my favorite quotes from the Prologue:

"...modern schooling...the deterioration it forces in the morality of parenting.  You have no say at all in choosing your [child's] teacher."  (At least you may know how difficult it is to do so. - my opinion.)

"Government schooling is the most radical adventure in history.  It kills the family by monopolizing the best times of childhood and by teaching disrespect for home and parents."

"How much more evidence is necessary?  Good schools don't need more money or a longer year; they need real free-market choices, variety that speaks to every need and run risks.  We don't need a national curriculum or national testing either.  Both initiatives arise from ignorance of how people learn or deliberate indifference to it."

"Exactly what John Dewey heralded...has indeed happened.  Our one highly individualized nation has evolved into a centrally managed village, an agora made up of huge special interests which regard individual voices as irrelevant.  The masquerade is managed by having collective agencies speak through particular human beings.  Dewey said this would mark a great advance in human affairs, but the net effect is to reduce men and women to the status of functions in whatever subsystem they are placed.  Public opinion is turned on and off in laboratory fashion.  All this in the name of social efficiency, one of the two main goals of forced schooling."

"School is a religion...Dewey's Pedagogic Creed...gives you a clue to the zeitgeist:"

Every teacher should realize he is a social servant set apart for the maintenance of the proper social order and the securing of the right social growth.  In this way the teacher always is the prophet of the true God and the usherer in of the true kingdom of God.

"Universal institutionalized formal forced schooling was the prescription, extending the dependency of the young well into what had traditionally been early adult life.  Individuals would be prevented from taking up important work until a relatively advanced age.  Maturity was to be retarded."

"Ordinary people send their children to school to get smart, but what modern schooling teachers is dumbness."

"What kids dumbed down by schooling can't do is to think for themselves..."

You can read The Underground History of American Education online for free.

For more, see Part I.